William T. Hardee married Juda Francis Lee on November 19, 1854 in Coosa County, Alabama. Juda lived a few houses down from William T. Hardee's family, so I would guess they were childhood friends.

William and Juda (Listed as Francis) still live in Coosa County, Alabama in the 1860 census. They have four young children and Juda's younger sister Jane is living with them also.

You can read about William's Civil War service here:

William and Juda (listed as Francis) Hardee are listed on the 1870 U.S. Census living in Van Zandt County, Texas. They have nine children, all listed as born in Alabama. The youngest is one years old so that narrows the move from Alabama to Texas between 1869 and 1870.

William's father Ziba Hardee died in 1862, but his Mother Tabitha is listed one family above his, so he moved near his Mother and siblings.

In the 1880 U. S. Census the family is listed in Johnson County, Texas. Juda Francis Hardee died in 1879, but William is listed with 10 of his 13 children and two nephews. The two nephews, Joseph and Archie Favors are the children of Juda's sister Jane Lee who lived with them in 1860.
Jane Lee married Archibald Favors and the story goes that William and Archibald entered the Civil War and had a pact that if anything happened to one of them, the other would look after their children. I need to do more research on Archibald and Jane Lee Favors and the two boys.
In 1882 W T Hardee is listed in the 1882 tax rolls for Ellis Counts County, Texas.

The shortest obituary I've ever seen was listed in the Dallas Morning News on April 14, 1893.
W. T. Hardee died last night.
His tombstone lists his death date as April 12, 1893.

I will write about his children in another post. 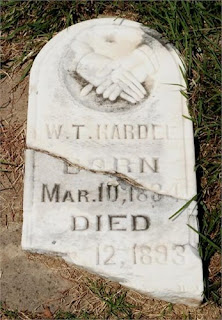