I know a lot about John's father and his son (My Grandfather) but, I don't really know a lot about him. I do know he was born 13 September 1888 in Downs, Osborne County, Kansas. His obituary states he was born at the farm home. He had two older brothers Knox and George and one younger sister Hazel May. John's parents were Arthur W. Hefley and Susannah Kaup Hefley.

He attended school to the 8th grade according to the 1940 census and I would guess he spent much of his youth helping run the farm. When John was eleven years old his father Arthur W. Hefley was elected to the 1899 House of Representatives for Kansas. I would image that John and his older brothers would keep the farm running while their father was away in D.C.

On 20 November 1909 he married Grace Irene Simpson who was also born in Downs, Kansas. They are listed in the 1910 census living in Arthur and Susan's Hefley homestead house with his younger sister and John's parents. 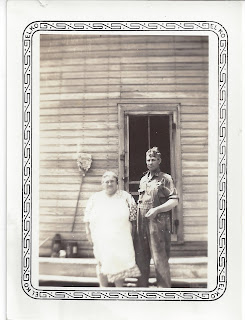 John and Grace raised three children on the Hefley homestead. Mildred Mae, Howard Henry and Lee Earl (my grandfather.) John made his living raising livestock and farming. I can only imagine how hard this must have been during the dust bowls of the 1930 and the depression to support a family.

In the 1920, 1930 and 1940 census John is listed as renting the farm. So looks like his father Arthur keep ownership of it till his death in 1941. I do not know if the farm was given to John or if all four kids received part of it. But, I do know John and Grace lived on the Hefley homestead till he retired around 1943/1945. None of his children wanted the Hefley homestead, so in 1945 John had an auction and sold off the farm contents. I remember my Grandfather, Lee, telling me that John had called him while he was away in the service to see if he wanted the farm and he had told him he was not interested.

In 1945 an auction was held to sell all the contents of the Hefley homestead. Everything is listed out. Oh how I would love to still have the "Roll top desk. Office chair. Bookcase and desk, walnut." 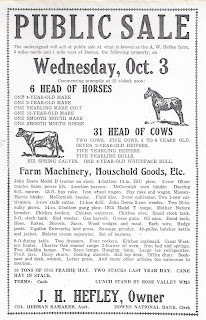 John and Grace moved to a house in town and lived there till their deaths. John died 7 March 1980 at the age of 91.

I knew my Great Grandfather, John but, I don't really remember a lot about him. I was 12 when he passed away. I wish I could go back in time and ask him about his life growing up on the Hefley farm and raising his family there.
Two of his obituary's are listed below.

"John Henry Hefly (sic) was born Sept. 13, 1888 north of Downs. On Nov. 20th 1909 he was united in marriage to Grace Simpson. To this union four children were born. His wife and two children preceded him in death. He resided on his father's homestead for a period of 60 years, farming and raising livestock. In 1943, he retired and moved to Downs. He attended the Rose Valley Church. He died at the age of 91 at the Mitchell County Memorial Hospital on Friday, March 7th, 1980. Survivors include one daughter, Mrs. Mae Folger of Downs; one son, Lee Hefly (sic), also of Downs; 5 grandchildren and numerous great grandchildren. Services were at the Domoney Funeral Home, Downs, Kansas. Officiating clergyman was Rev. Jim Hancock. Pallbearers were Keith Quillen, Irvin Burmeister, Howard Hofer, Tony Heinen, John Muck and Milton Voss."

DOWNS - The funeral for John Henry Hefley, 91, a lifelong resident of the Downs community, will be at 2 p.m. Monday at the Domoney Funeral Home, Downs, the Rev. James Hancock officiating. Burial will be in the Downs City Cemetery.
Mr. Hefley died Friday at the Mitchell County Community Hospital, Beloit, after a short illness. He was born Sept. 13, 1888, at the farm home north of Downs where he farmed and raised livestock until 1943 when he retired and moved to Downs. He attended the Rose Valley United Methodist Church.
Surviving are a son, Lee, and a daugher, Mrs. Mae Folger, both of Downs; five granchildren and numerous great-grandchildren.
The family suggest memorials to the Downs Mid-America Nursing Center.
Posted by Tina Telesca at 9:00 AM