Since my Dad was military we moved around every few years. But, if we could, we would spend summer vacations either in Texas with my Moms side of the family or in Kansas with my Dads parents.
So summers were spent with my Paternal Grandparents in Downs, Kansas and my Great Grandparents Adam and Ora Stegman would always come to the house to visit.

I remember them as very happy people. The would drive over and park out front on Main Street. I could see them walking up through the big picture window in the front of the house if I wasn't sitting out front on the porch swing, which was where I usually was. They had a white poodle that went everywhere with them. Adam had even build a wooden box for the middle of the front car seat so the poodle could see out the window of the car. I don't remember the name of the dog, but they spoiled him.

Adam Stegman was a first generation American. Both his parents had immigrated from Russia. They were Volga Germans, who spoke the German language. I don't know if my Great Grandfather spoke Volga German or not. I would guess that since it was his parents first language that he would hear them speak it, or maybe they did away with the German language to be more American. Adam did not have any type of accent. I never knew about his Volga German ancestors till I started doing research. He never spoke about his family.

Adam was born 1 November 1893 in Pfeifer, Ellis County, Kansas to immigrant parents Christ and Apollonia Basgall Stegman. I don't know anything about his life growing up but he was born and raised on a farm and would assume he helped around the farm.

Adam filled out his Draft Card for the war on June 5, 1917. He is listed as married, tall height, slender build, grey eyes and brown hair. He never served in the military.

Adam and Ora are found in the 1920 census living in Ellis Township, Ellis City, Ellis County, Kansas. (Say that three times fast!) He is 25 years old and a machinist at the railroad and speaks English. I find it interesting that both his parents were born in Russia but he lists them as born in Tennessee and Kentucky.

400,000 railroad shopmen workers walked out of their jobs and went on strike. This was in response to the Railroad Labor Board cutting wages, and work rule changes on the railroad. This came to be known as the Great Railroad Strike of 1922 and commonly known as the Railway Shopmen's Strike. The railroad shopmen were the workers who maintained the rolling stock, the rails and the rail beds. This included Adam who was a machinist. Not all of the railroad unions went on strike, so the trains did not stop running. It was long term that the trains would be affected.


You can watch a video about the 1922 Railroad strike here and a summary of the strike here.


Adam went on strike with the other shopmen in July of 1922. I can't even imagine how hard of a decision that must have been. Striking meant no income for his family and if the strike did not work out no job. He did not work for the railroad for 10 months. I would guess he found side jobs to bring in income and maybe Ora found a way to make some income too for the family. I don't know. But, in April of 1923 he found a job with another railroad, Missouri Pacific as a machinist in the Mechanical Department of North Kansas Division.This required him to relocate to Downs, Kansas. Adam left first and Ora and Irene followed later.

Adam would spend the rest of his career working for Missouri Pacific Railroad.

They rented a few different houses in Downs and seemed to settle in and became part of the community.

In 1924 Adam bought a car according to a newspaper article from The Downs News and The Downs Times.

Adam Stegman, one of the boys out at the Missouri Pacific shops, bought one of the late model Maxwell touring cars from the local agens, Jun & Hauptli, last week.


Mr. and Mrs. Adam Stegman and Mr. and Mrs.  W. L. Harper motored down to the Glen Elder oil well Sunday afternoon to take in the sights and to enjoy an auto spin into the country.

I know that Adam and Ora loved the outdoors. They would spent time together and later as a family outside enjoying many outdoor activities.

I asked my Dad about this and he didn't know anything about it. Not sure why they would switch houses but they did.

According to the newspaper articled the family continued to travel to Ellis to visit family and friends.

In 1926 I found this article and was a little surprised by the tag line:


TOSSES BABY FROM CAR
One evening last week A. Stegman drove his car down town on a mission and when he started to return home, his little baby daughter, who had accompanied him, insisted that she stand on the seat beside him rather then sit down. As he went to turn the car in the intersection at the hotel corner the little tot was thrown from the car, alighting on the pavement. Mr. Stegman immediately stopped the car and picked the little girl up, expecting to find her badly injured, but fortunately her injuries were slight, consisting of only a few scratches and bruises.

My Great Aunt was not hurt and doesn't remember this, but does remember hearing stories about it.

In 1938 Adam and the families residence is listed in Concordia, Kansas in his railroad pension papers. I believe, he had to move the family there because that was were the work was with the railroad, but they were back in Downs by 1940.

In 1953 Adam and the family moved to Kansas City, Missouri to continue working with the Missouri Pacific Railroad. They kept their house in Downs. He worked there from November 1953 to November 1958 when he retired from the railroad. According to his pension record he also worked for Jones Wholesale Co. in Kansas City and that ended November 1958.

They returned to Downs, Kansas after Adam retired. I remember visiting their house and they had a garden in the back. We would enter through the back door into the kitchen. I don't ever remember entering through the front door. Grandpa Adam had a shelf next to his chair and always had a candy bowl that he would let us pick a piece.  That was the highlight of my visit.

In 1966 they celebrated their 50th Wedding Anniversary.

In 1976 they celebrated their 60th Wedding Anniversary. 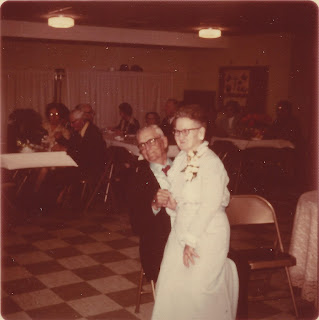 Ora had a stroke around 1980 and went to live in the nursing home in Downs. Adam decided to move in with her so he could be with her. True Love...

Adam passed away August 26, 1986, two years after Ora passed away. His obituary follows:

Adam Stegman was born to Christopher (sic) and Apollonia Stegman on November 1, 1893, at Pfeifer, Ks. Adam departed this life at the Downs Nursing Center on August 26, 1986. He was married to Ora Parsons, March 29, 1916. To this union of 67 years were born two daughters, Irene Hefley and XXXX. Adam was a master machinist for the Missouri Pacific Railroad until his retirement in 1958. He was an avid outdoors man enjoying hunting, fishing and camping. He and Ora were members of the Picnic Ants, a chapter of NCHA. Adam was preceded in death by his wife, Ora. He is survived by daughters and sons-in-law, Mr. and Mrs. Lee Hefley (Irene), Downs, Ks. and Mr. and Mrs. XXXX XXXX (XXXX), Kansas City, Mo.; 5 grandchildren, 6 great-grandchildren, and 3 great-great-grandchildren. The funeral Service was held August 29, at St. Mary's Catholic Church, the Rev. James Hoover officiating.Organist for the service was Mrs. Doris Mick. The following served as pallbearers: Ted McKain, Dan Cowley, Al Stroh, Lawrence Reinert, Raymond Osborne, and George Fletcher. Internment was made at the Downs Cemetery. A memorial has been established for the Downs Nursing Center.