How did I miss that?

Last night I was organizing my digital records (a slow process - but I'm trying) and I got distracted (like I usually do) and started looking at my husband's Great-Great Grandfather's 1910 census record. 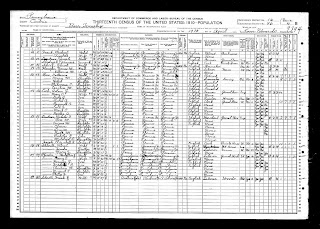 What I realized after looking at this, was that this was showing his second marriage. I did not realized he had been married twice. I wanted to bang my head against a wall because this is a classic example of me not analyzing information that I have. At some point and time I saved this but did not really look at it. Which really does me no good. I love finding new information, but I know I have documents that still need analyzing and I'm sure I have new information sitting in my files just waiting for me to look at them again. Oh, if I could only get organized!

So after realizing James Mikel Flanigan was married twice I headed over to USGenWeb and went to Cambria County, Pennsylvania. Lynne Canterbury and Diann Olsen have done a great job of keeping the site updated with valuable information. I was able to find a marriage record for James M. Flanegan and Catharine Hefele. They were married in 1895. His first wife Sarah Catherine Killins Flanigan died in 1892. James Flanegan is buried at St. Nickolas Cemetery in Barr Township, Cambria County, Pennsylvania. Neither of his wives are buried with him. His first wife is buried in a remote cemetery and I do not know where his second wife is buried.

I contacted my husband's cousin and he had not realized either that James had been married twice and he too had seen the 1910 census. (Okay, that made me feel better.) He said he will get the marriage record next time he goes into town.