Ziba Hardee was married twice. He was first married to Peggy Mitchell in Baldwin County, Georgia on February 6, 1813. Below is their marriage record recorded in Baldwin-Marriages, Book, 1806-1842, page 321.

TRANSCRIPTION: Georgia, Baldwin County
To any Judge, Justice of the Inferior Court, Justice of the Peace or Minister of the Gospel- You or either of you, are hereby authorized to join in Holy Mate of Matrimony John Hardee and Peggy Mitchell of this county, and for your so doing this shall be your sufficient License. Given under my hand and seal this 4th day of February 1813.
[signed] Abner Locke for
[signed] A. B. Fannin, Clk seal
Georgia Baldwin County - I certify that the within named persons, were duly solemnized in the Holy bonds of wedlock by me this 6th day of February 1813.
James Jackson J.P.

[His name is listed as John Hardee and it is assumed this is Ziba Hardee. This is the only record I have found so far that lists his name as John.] 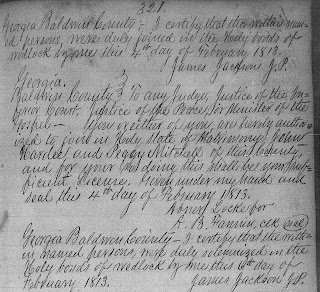