I believe the family moved from Coosa County, Alabama to Van Zandt County, Texas in early 1870. Sam would have been around 9 years old. Today I20 runs from Coosa County to Van Zandt County and it is about 600 miles. This may have been the path they took through Alabama, Mississippi, Louisiana and Texas. They would have had to cross the Mississippi  River and I would guess they crossed by ferry in Vicksburg. If they traveled by covered wagon it could have taken them up to 75 days to travel or longer. In 1870 they were a family of 11. The children were between the ages of 15 and one year old. I can't even imagine the hardship they went through traveling with young children, through unfamiliar territory to a new destination. But, they made it to the new land and in 1870 the family is listed as living in Van Zandt County, Texas.

In 1880 Sam's family is living in Johnson County, Texas but I have been unable to locate Sam in any 1880 census.

In 1886 he married Georgia Anna Clarissa Ransom on August 22 in Parker County, Texas. Sam was 26 and Georgia was 16.

I don't know where they lived after their marriage but I find a S. B. Hardee in the 1888 Tax rolls in Ellis County, Texas. In April of 1888 their first child William Russell Hardee is born in Wise Co., Texas.

In 1895 Sam and Georgia have four children and purchase land in Wise County, Texas for $1,000. It was 198 3/4 acres and was on the West Fork Trinity River 10 miles SW from Decatur. Looking at a map today, my guess would be it was between Paradise and Boyd.

In the 1900 census the family of eight is listed as living in Wise County, Texas. Sam cannot read or write and owns a farm with a mortgage. His occupation is a farmer.

In 1910 Sam and Georgia are living in Decatur, Wise County, Texas. Sam is listed as 50 years old and married for 23 years. He is a farmer working on his own account and in this census it says he can read and write. It also says he rents his dwelling.
Seven of their eight children are living with them. One daughter married at 15 and was living with her husband and another daughter was also married but living with them with her new husband.

In 1920 Sam and Georgia are living in Rhome Town, Wise County, Texas. Sam is listed as 63 years old (he was 60) and a laborer on a farm that he rented. He again is listed as not being able to read or write. Being a farmer, education was not a top priority and I would lean more toward Sam not being able to read or write. Three of their children are still living with them and Sam's widowed Mother-in-law, Marguaretta Ransom is living with them also.


These are the only two photos I have of Samuel Burel Hardee. Both photos show Sam and his brothers taken on the same day. One with hats and one without. Don't know who the boy is in the back left. If anyone has other photos of Samuel I would love to see them. Date unknown. Courtesy of my cousin Shirley and Mike Hardee. 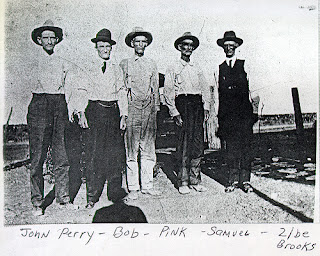 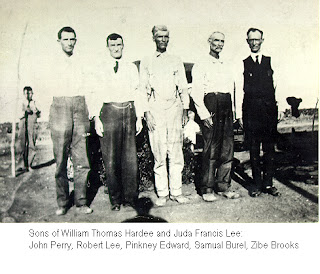 [In the second photo I think my Great Grandfather Samuel resembles Sam Elliot.]

On June 29, 1929 Samuel Hardee died at his home. His obituary is listed in the Decatur News.


S.B. Hardee died at his home in Newark, Saturday, June 29, 1929. Funeral services were held  in Newark Sunday afternoon at the First Baptist Church with Rev. Brammer officiating. Internment in Dido cemetery. Mr. Hardee was a brother-in-law of John Ransome (sic) of near Decatur.

The information on Sam's death certificate was provided by an unnamed Hardee son. Much of the information is wrong. It lists him as 60 years old, he was 69. It lists his father as J.W. Hardee which is incorrect as his father was William T. Hardee. It lists his mother as Georgia Ransom which was actually his wife. I would say the son got confused when answering the questions. No cause of death is provided and just says "No Medical Attendant."

I only know the basics about Samuel Hardee from what I have been able to find in written sources. I really haven't heard any stories about Sam. The stories are what make the person come alive. If anyone know any stories about how life was growing up for Sam or his brothers I would love to hear them.


Children of Samuel and Georgia Hardee

All the children stayed in Texas except the last two daughters, Mary and Edna who moved with their families to California. We are just now connecting again with our California Hardee relatives.