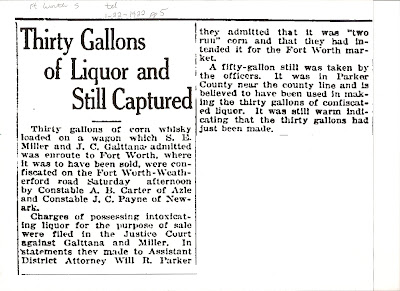 Imagine my surprise when I found this article on my Great Grandfather John Galttana from Texas in1922.

Apparently, my grandfather and Mr. Miller were arrested for "possessing intoxication liquor for the purpose of sale"

I can just imagine my ggrandfather John Galltana and Mr. Miller sitting in the front of the wagon with their "load" tucked under blankets in the back, while driving their horses down Weatherford Road in Fort Worth.

My cousin (once removed from my Hardee side) Mary Galttana told me that her husband, "Bill" Galttana (also my first cousin once removed from the Galttana side) had told her about when the police came to the house and searched for the still. Bill was about eight years old and was scared to death with all the commotion. He said the police found the still and took it apart and hauled it away.

When I was in Fort Worth I went to the courthouse and asked how to get information on this and the lady took my name and number and said she would call me, but never did. I need to follow up on this because I would love to find out what happened. Did he serve time?

I had been told by family that John Galttana liked to party. The family would take the wagon to town and then the kids would be tucked into bed under blankets in the back of the wagon and then John would go off to party. I do not know if his wife, Mary Jane went with him or stayed with the kids. Then the next day they would pick up their supplies from town and head back home.

Thirty Gallons of Liquor and Still Captured
Thirty gallons of corn whisky loaded on a wagon which S.E. Miller and J.C. Galttana admitted was enroute to Fort Worth, were it was to have been sold, were confiscated on the Fort Worth-Weatherford road Saturday afternoon by Constable A. B. Carter of Azle and Constable  J. C. Payne of Newark.
Charges of possessing intoxicating liquor for the purpose of sale were filed in the Justice Court against Galttana and Miller. In statements they made to Assistant District Attorney Will R. Parker they admitted that it was "two run" corn and that they had intended it for the Fort Worth market.
A fifty-gallon still was taken by the officers. It was in Parker County near the county line and is believed to have been used in making the thirty gallons of confiscated liquor. It was still warm indicating that the thirty gallons had just been made.
Posted by Tina Telesca at 7:05 AM